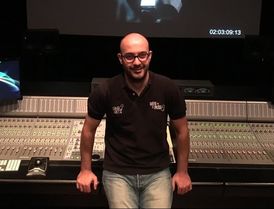 Born and raised in Madrid, Andrés started his career as a video editor in one of the leading production companies in Spain, MediaPro. His true passion, however, was to compose music for film. His first feature as a composer, Going Nuts (2006), had a theatrical release and was the first film in the world to feature peanuts as the main characters. The score earned Andrés national recognition with the Ateneo Coste Cero Award in 2008 for Best Soundtrack. Shortly after, Andrés wrote the music for the Spanish-North American co-production Disney: Through the Looking Glass (2010), a score that earned him his first Jerry Goldsmith Award after 5 years of consecutive nominations.

In 2010, Andrés moved to Los Angeles to continue his education. He earned a Master’s Degree from Chapman University, CA and soon started working in film production with directors of the stature of Randal Kleiser (Grease) and Terrence Malick (The Tree of Life).